No, I did not go cruising with my mother, Anne Louise Kassem (ALK).  ALK is a 40 foot sailboat that belongs to Hans, a friend of my Swiss friend and collaborator, Eric Madeja.  Eric is an underwater photographer and collaborator on the Coral Triangle book.  Hans is a Dutch pensioner (starting this year) who sailed ALK from Holland, through the Mediterranean, down to South Africa and across the Indian Ocean over the past 30 years.  The boat now stays in the Malay Archipelago year-round and Hans shuttles between ALK and his home in Amsterdam.

Eric had arranged for Hans to do a cruise from Ambon to Timor Leste, down to Indonesian Timor and then Alor.  I had been invited to cruise from Sabah to Darwin with them last year but had obligations in Kyoto that prevented my joining.

I met Hans for the first time on the Com harbor jetty.  They came across for dinner on shore at the guesthouse where I stayed that night.  We had too many beers, a great meal cooked by the owner’s wife and heard tales of remote volcanoes in the middle of the Banda Sea, whales and sea bird colonies.  Hans was gregarious and friendly.  I liked him instantly. 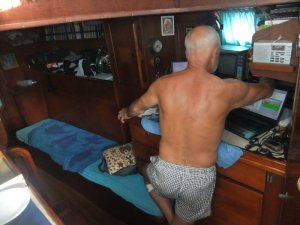 Captain Hans at the helm

The next day, they picked me up and we set off for the very eastern tip of Timor and the Nino Konis Santana National Park – Timor Leste’s first and only national park.  It had been more than 20 years since I had last been on a sailboat and I must admit to being a bit nervous.  But Hans gave me a tour (proper operation of the head first!) and showed me to my bunk and where to stow my stuff.  Most importantly, all shoes got stored FAR below deck.

ALK is a 35 year old, steel hulled sailboat and has been with Hans for the last 30 years.  She is equipped with GPS, autopilot, sonar and radar!  I had never played with any of those things before and it was fun to start learning about them.  I also had to learn to operate the compressor so we could fill tanks and dive!

I quickly fell into their daily routine.  If we were moored somewhere conducive for diving, Eric would get up early and go for a dawn dive.  I usually skipped that dive and made coffee and tea while Hans slept a bit later.  There would be a mid-morning dive, a bit to eat for lunch and then an afternoon dive, and sometimes Eric would go spearfishing for our dinner. 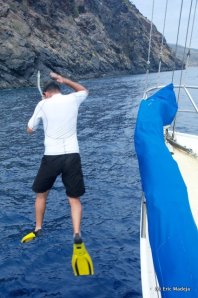 Time to check out the dive site!

Other days, we had to travel to the next sites to keep our schedule.  Eric preferred sailing at night to allow for diving during the day but Hans found it tiring and they had to discuss it often.  Usually we motored with the diesel engine and used the sails only with a really favorable wind.  From Com back to Dili we sailed over night and I kept the watch from midnight to 3:30am.

Hans baked fresh bread several times a week with a  special pan that made the bread on the stove top.  Eric loved to serve sushi with a cocktail in the evenings.  We had green curry, spaghetti, maggi mee, nasi goreng and other delicious meals every day. 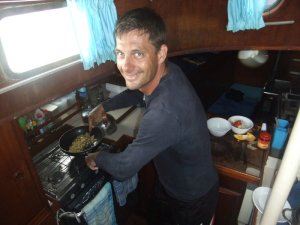 Its a small galley!

Sometimes you have to take off your pants to fit into the galley.

The boat cruised with just engine power and a good current at 5 knots.  With a good wind and the engine we could hit 7 or 8 knots.  The relaxed pace was a joy but it meant that we had to spend much of the time in transit between sites.

It was great to be back on a boat, even if just for a short time.  Memories of my high school days sailing in the Aegean and my American grandfather all flooded back.  Would I ever like to have a life like Hans’?  Maybe I would some day. 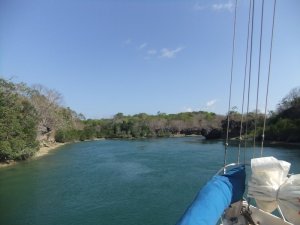