Its time for another All-Staff-Retreat!  The dreaded 3 words.  Six a.m. group yoga.  Team building exercises that involve hugging people you’d rather disembowel.  Endless sessions of navel-gazing, developing strategies that will be immediately ignored, and feedback sessions that never result in any changes.

That was what welcomed me at WCS.  Those three words.

But, WCS is not the monochrome bear that I used to work for.  Its not even the potholder.  This is a whole new alphabet.

And our All Staff Retreat was a different animal.  We needed to get away and get to know each other.  I am new here, but apparently I am not the only one.  Others have only been around for a few months.  We are growing.  So….. we went away (all 170+ of us) to one of the most historic cities in Indonesia to get to know each other.

Of course, we had some group sessions.  We had some plans for some team building.  But we also had a cool train ride across Java. We had trips to not one, but two (two!) World Heritage Sites (there are 8 World Heritage Sites in Indonesia, so… 25%!), and the chance to meet people from Sumatra, Java, Sulawesi, Lombok, Sumbawa, Pulau Rote and more….. the WCS Indonesia Program is as diverse as the country itself.

And…. they invited Fareea to come along too.  So nice of them.  🙂

And with no further ado, here are some of the photos.

We got up at 3:45 on a Friday morning to meet at the office at 4:30 to catch a bus to the main train station in Jakarta.  Then we had an 8 hour train trip across Java to Yogyakarta (pronounced Jog-ja-karta).  We had a nice dinner Friday night at the hotel, an inspirational talk from our country program leader (Ibu Yani) and an introduction session where all 170 of us got to say who we were.  Saturday morning had us listening to presentations about our main programs and projects and then we went to the first World Heritage Site.  Sunday we went to the second World Heritage Site, got some shopping in, and then we had a dinner with our ~40 Marine Program staff.

Candi Prambanan or Candi Rara Jonggrang is a 9th-century Hindu temple compound in Central Java, Indonesia, dedicated to the Trimurti, the expression of God as the Creator (Brahma), the Preserver (Vishnu) and the Destroyer (Shiva). The temple compound, a UNESCO World Heritage Site, is the largest Hindu temple site in Indonesia, and one of the biggest in Southeast Asia. It is characterized by its tall and pointed architecture, typical of Hindu architecture, and by the towering 47-metre-high (154 ft) central building inside a large complex of individual temples.[2] Prambanan attracts many visitors from around the world.[3][4]

Borobudur, or Barabudur, is a 9th-century Mahayana Buddhist temple in Magelang, Central Java, Indonesia. The monument consists of nine stacked platforms, six square and three circular, topped by a central dome. The temple is decorated with 2,672 relief panels and 504 Buddha statues. The central dome is surrounded by 72 Buddha statues, each seated inside a perforated stupa.[1] It is the world’s largest Buddhist temple,[2][3] as well as one of the greatest Buddhist monuments in the world.[4]

And now some photos…. and videos….. 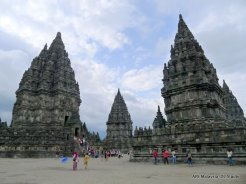 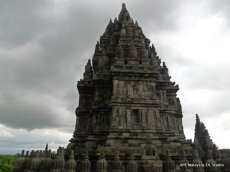 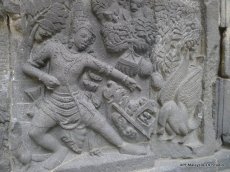 And miscellaneous photos around Yogya and the train….

And a few videos from the window of our train going back to Jakarta.  Enjoy!

This entry was posted in Indonesia and tagged Borobodour, Indonesia, Prambanan, Yogyakarta. Bookmark the permalink.